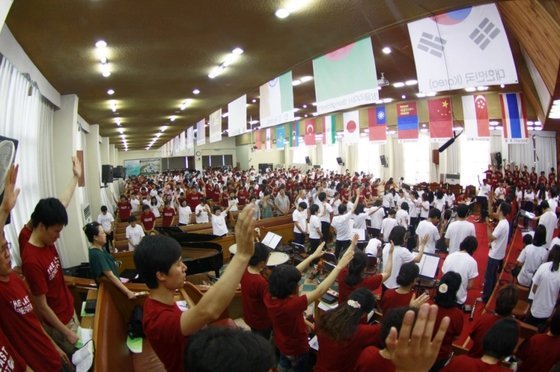 Attendees of the Seminar on Systematic Theology
(PHOTO: Jeong Myung-gyu)

The seminar was held not only to teach them about systematic theology, but also to make them aware of the rise of cults in Korea. Rev. Kim Sung-woo, senior pastor of Seoul Antioch Presbyterian Church and the seminar’s main speaker urged believers not to sink into these cults, but to be aware of them. He quoted J.L. Williams, who defines a cult as “a line of thought or practice which deviate[s] from the mainstream of Christianity.” Kim warned of many cults in Korea, saying that the Catholic Church was a representative one. Quoting from the Book of Matthew, he said, “Beware of the false prophets, which come to you in sheep’s clothing, but inwardly they are ravening wolves.”

Kim further criticized the Catholic Church, which he said has dominated middle Europe for some 1,000 years, leading the history of the world toward spiritual darkness. Kim criticized their claim to being one and the same as Christianity. He referred to what he saw as their wrong religious views: “As there are several roads to climb to the top of mountain, the way of salvation are also several,” which suggests salvation is possible without Jesus Christ.

Kim criticized the Catholic Church’s biblical views, where he sees a vast difference between it and mainstream Christianity. According to Kim, Catholics claim, “Because the Bible contains many things other than the Word of God, we cannot say the Bible and the Word of God are the same.”

Attendees of the seminar thought that it helped foster their spiritual faith. Kim Geom-su, a church elder said, “We need to keep our faith in the right way and not be tempted into this lustful and selfish world.”

In response to such problems he sees as only getting worse, Rev. Kim has decided to hold such seminars more frequently. He wishes to encourage believers to be strong in their faith and know which doctrines are right and wrong. He calls on believers to read the Bible as much as possible until the end of the world.

← Happy birthday to a visionary
Where the magic happens →