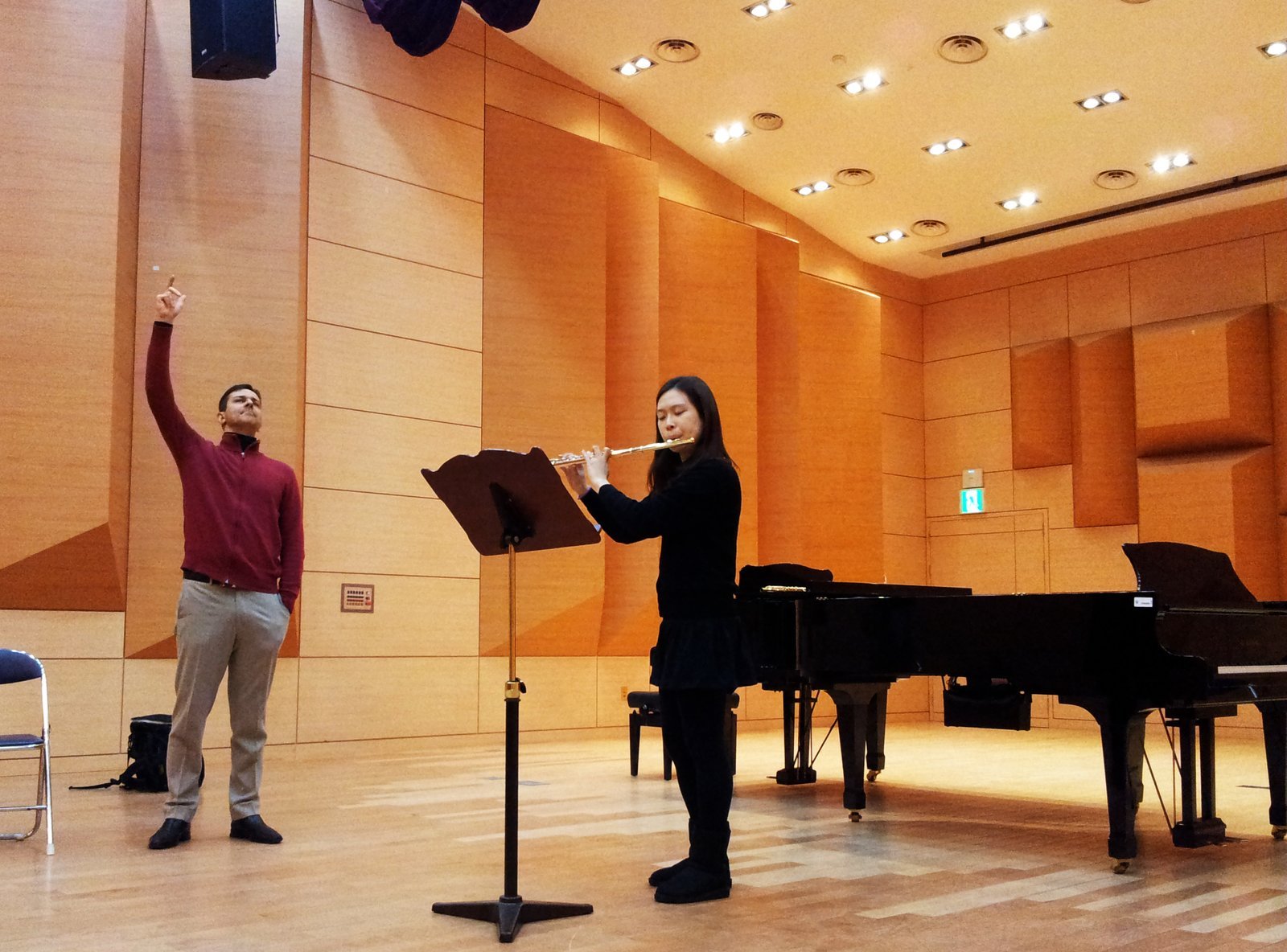 He is “probably the most famous player in Europe at the moment.” That is how German School of Music Weimar professor Philipp Jundt describes Italian flutist Davide Formisano, who dazzled his audience last Saturday with a commanding performance at Seoul Arts Center. Accompanied by Professor Jundt, also on the flute, and pianist Ji Seok-young, Formisano began his recital with C.P. Bach’s “Trio sonata d-moll”, taking listeners on a musical journey that, as Formisano described it, covered “a large spectrum of almost the [entire] flute repertoire.” He closed the formal portion of his program alongside guest flutist Hyunim Yoon with an energetic, practically athletic, performance of Doppler’s “Rigoletto fantasie”.

Throughout his nearly two-hour performance, Davide Formisano demonstrated his mastery of articulation and tone, while exuding a conspicuously cheerful demeanor that conveyed the joy he feels just to play. His performance clearly had an effect on the audience as well, judging by the large crowd of fans waiting in eager anticipation outside the Recital Hall afterward. 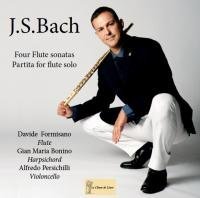 Formisano’s visit to Asia (his next stop is Japan) is auspiciously timed with the release of his new CD of four flute sonatas by J.S. Bach. Those in the audience on Saturday got a taste of the new album with his solo performance of Bach’s “Partita”. Formisano says he is very happy with this CD, as it is his first “important” recording in eight or nine years.

The CD was a difficult one to record. “I think there is no more difficult music to record than Bach,” he said in an interview with the Kangnam Hakbo. “Bach is the father of all composers. He is very strict. It’s really mathematic, this music. You have to be really strong with the rhythm. You have to be ready with your concept of what you are playing and doing. But it’s not only mathematic. It is also pure soul. This is the big secret of this music and why it is so great and difficult to play.” 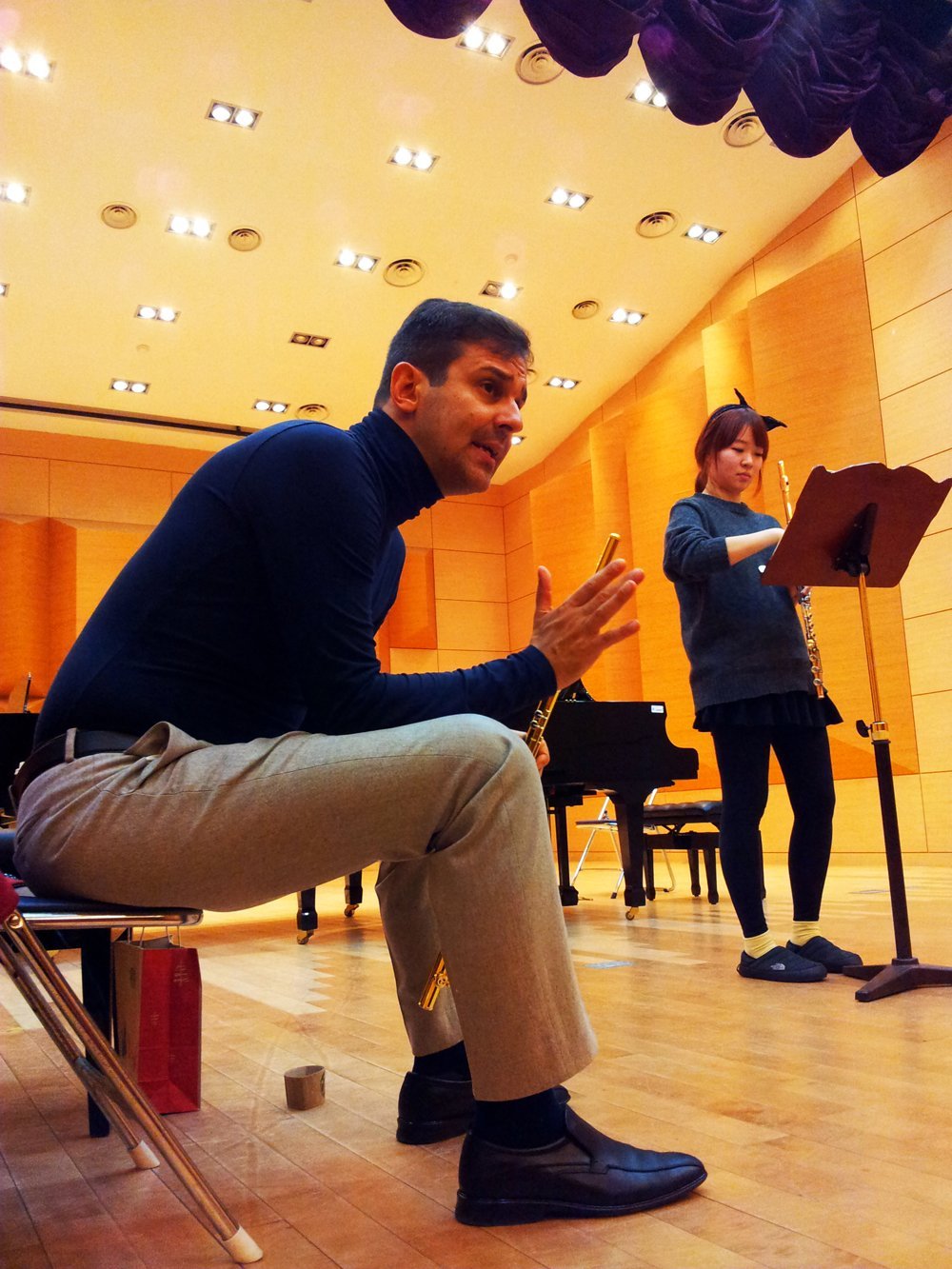 Davide Formisano advises the other masterclass students during his lesson with sophomore Song Hyeri.

2012 and the release of this CD suggest the exciting direction his career is taking. Formisano has been a Professor of Flute at the University of Stuttgart since 2007. This past July he left the Orchestra of La Scala Milan, where he was principal flute since 1997. Being so busy with both jobs, finding the time to record such an ambitious CD was an accomplishment itself. It was “a big reason why I left the orchestra,” he said.  “I want to have the time again to think about my music and to practice it well and be happy with my playing. Sometimes you are so busy you don’t know who you are.” Formisano described recording the Bach CD as going “back to school.” Reflecting on his own musical journey, he said, “I hope now that I’m in the middle of my career that I start to understand something about this music.”

Philipp Jundt’s flute students have had a chance to consider their own careers during the series of masterclasses Formisano has been teaching at the German School of Music Weimar since last week. The students, who were part of the audience Saturday night, have seen him bring the same energy and passion he has on stage to the classroom, reminding them that their professors are not only teachers, but musicians and performers as well.