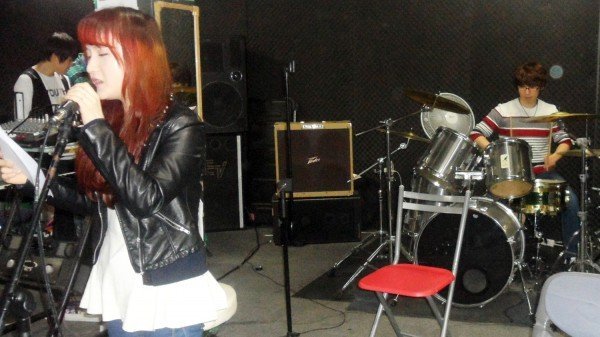 While Student Hall undergoes renovation, Sound of Heaven have to rehearse in a rented space.
(PHOTOS: Yeo Joohee)

There are many student clubs at Kangnam University. The hip-hop and dance clubs are well known, but the energy and individuality of rock music make clubs like Sound of Heaven especially interesting.

Sound of Heaven formed in 1980, making it the oldest rock music club at the university. The founders were united by their love of classic rock and pop songs. Playing as a band, as opposed to just singing along to a recording, has always been central to what they do.

The club currently has ten regular members who take on the duties of vocals, guitar, drums, and synthesizer. Most of the members are vocalists, with only two members playing instruments. The club is currently seeking more musicians. 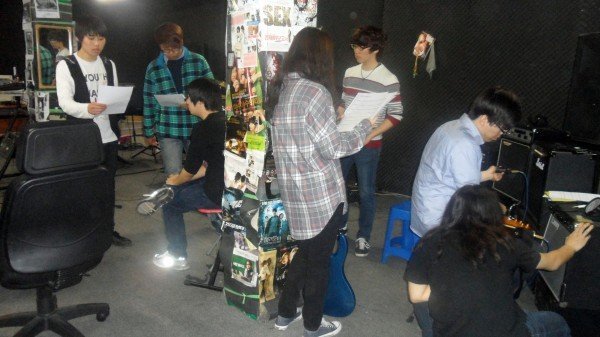 All of the members admit that none of them could sing or play when they first joined. They were always taught by previous members — learning the basics, such as how to read music. The passion of each member, however, has allowed their skills to quickly improve. They practice 2-3 times a week for 3-4 hours at a time.

Sound of Heaven perform throughout the academic year at Kangnam University festivals, freshman orientation concerts, and local events. Freshman orientations are their favorite to play. They love the stage, sound, and lighting setup, as well as the enthusiastic response from the audience.

Unfortunately, things have been tough lately for Sound of Heaven. They, along with many other student clubs, are unable to practice as their rehearsal space in Student Hall is currently undergoing renovation. They still meet once a week, but in an empty classroom. They’re able to rehearse, but have to pay for the use of a studio.

These setbacks, however, do not discourage them. Even if it means inconvenience or having to spend their own money, they’re determined to stay active. Sound of Heaven have been called Kangnam University’s best rock band, and they want to make sure they live up to that reputation.