In celebration of the 70th anniversary of Korea’s National Liberation Day, the 5th Yeoncheon DMZ International Music Festival was held between July 25 and August 2. In addition to concerts, the festival’s Music Academy holds private lessons, masterclasses, lectures, and competitions. German School of Music viola professor Erwan Richard returned to the festival as Artist-Faculty, a position he has served since 2011. On the afternoon of July 30, Richard and his 3rd-year student Lee Hyun Kyung joined Korean and international musicians in a concert at the DMZ’s Seungjeon Observatory to promote peace between and eventual unification of the two Koreas. 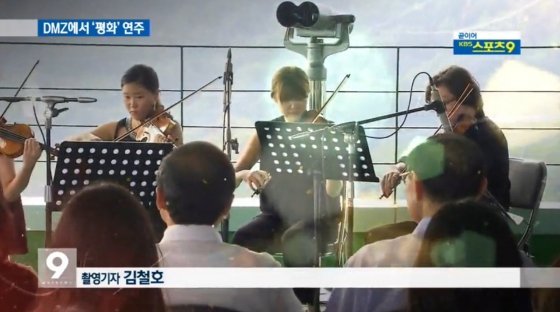 The moving concert included pieces such as Samuel Barber’s “Adagio for Strings” from the film Platoon followed by “Romeo and Juliet, Overture-Fantasy” by Tchaikovsky — metaphors for war and a wish for love and unity.

The concert was covered by news outlets including KBS and JTBC. Click the links to see video news coverage of the event.