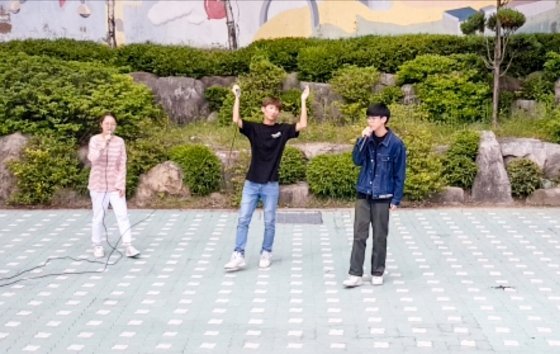 Busking with members of Owechim in front of Shalom Hall, May 2018.
Photo: Kyeongseon Park

The history of hip hop is largely divided into two periods. One is old-school hip hop, and the other is new-school hip hop. Of course, there are many differences between the two periods, especially in the mood and message of the music. Old-school hip hop music was for parties, so rappers used disco and funk. New-school rappers, on the other hand, brought the mood of the street. They highlighted the wildness and free-spirit of B-Boy culture. And that music was used for commercial purposes.

How has this genre of music drawn interest from people in Korea? I found the reasons in quotes from interviews with Korean rappers Swings and Young B. “Hip hop,” Swings says, “is good at absorbing every new trend, for example, fashion, attitude, and creative music. Young people [meaning mindset rather than age] like them.” People are attracted to new things. Young B says, “People consume the spirit of artists” The free lyrics and attitude of rappers give people a sense of liberation. Finally, the influence of TV programs such as Show Me the Money, High School Rapper, and Unpretty Rapstar has been huge. As we are frequently exposed to these programs, our interest, attention, and longing grow.
My own interest in hip hop started with Show Me the Money. After I had finished the national college entrance exam, I was bored. Around that that time, I happened to hear the song We Are (시차) by Woo Won Jae on Show Me the Money. I listened to it repeatedly and tried imitating him.

Since then I found out about hip hop club Owechim (외침) at Kangnam University. I joined and started writing lyrics. The lyrics I write are about love, self-esteem, trips with friends on the tropical beat, and my dreams for the future. The photo above is of me (on the left) performing “What I Want to Say” with other members of Owechim in front of Shalom Hall. We wrote own own lyrics. My part was about my dream saying, “Although I don’t know anything about what lies ahead, years from now I’ll be a great person.” The beat was made by my teammate Dong Hyun.

That day was such a happy one because I could show who I am. Rap is the vehicle for my story. In addition, when the beat is good and the lyrics flow, there is no chance to feel bored. Flow shows a rapper’s own style of delivery. It involves things like tempo, timbre, accent, and callbacks. Zico and Jay-Park, for example, show their hustle life and relaxed attitude in their lyrics and flow. When unique lyrics flow, I feel unique myself.

If you’re interested in hip hop, you should try rapping too. If rap isn’t for you, there’s also dance and art. I’m also interested in dance. However you get into hip hop, remember there isn’t one right way. They’re all ways to help you express yourself.

← Stay cool with a swim
Freely you have received, freely you give →