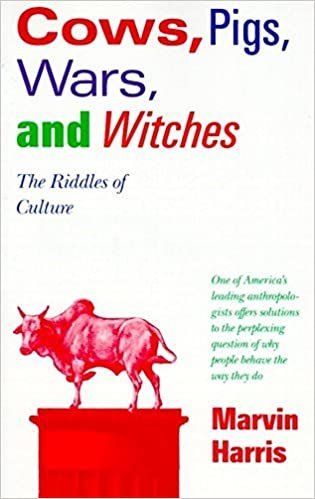 Last May in the American city of Minneapolis, Minnesota, an unarmed black man was killed by a white police officer’s excessive use of force. The citizens around him filmed video of the atrocity, which led to demonstrations and riots throughout the United States. Discrimination and hate crimes against Asians have also been occurring due to COVID-19. These have ranged from racist slurs to violence.

“BLACK LIVES MATTER” and “STOP ASIAN HATE” are slogans that define the time we live in. Under these circumstances, I read Cows, Pigs, Wars, and Witches: The Riddles of Culture by cultural anthropologist Marvin Harris. It is about the process of any attempt to understand the basis and stream of consciousness of humanity, from primitive culture to modern civilization, using scientific objectivity, especially cultural anthropological imagination.

Chapters 10 and 11 deal with witch frenzy (witch-hunt). He said that the actual meaning of witch-hunt was to shift responsibility for a crisis in late medieval society from the church and state to virtual witches who took the form of man. The purpose was to defend institutional structure.

Comparing witch madness and combative Messianism, the Messianism movement was a movement that united the poor and the atheists, reducing the gaps between social groups, gathering the power of the public, alienating all the people, causing anger and frustration. It was a frenzy to perpetuate the poorer and ruling classes.

In the most impressive part of his book, Harris states, “It should be considered a moral ground order to expand scientific objectivity into the enigmatic realm of our lifestyle. . . . If there’s one thing we haven’t touched on much, it’s this.” It is the author’s last request.

We have had a counterculture in the past and present and probably will in the future. This includes the aforementioned global problem of racism. They discriminate against men and women because of the color of their skin, just as they did in the past. Differences are treated as discrimination in areas that cannot be changed due to biological differences.

This writer further deals with issues of consciousness that have not been secured objectivity due to problems of science in a world dominated by science. I have never questioned the word “objective,” but I felt the danger of his use of “objectivity” and thought again. The idea that what we think is objective may not be objective and that evaluating, abominating and hating all cultures by such standards is wrong in the first place.

Minority culture or culture shared by a large number of people, both are culture. I don’t think anyone can set standards for the objectivity of any culture. All groups need to be respected. Oscar Wilde said, “Selfishness is not living as one wishes to live, it is asking others to live as one wishes to live.” We should not criticize other people or their culture with uniform objectivity, one egoism, as Marvin Harris and Oscar Wilde have said.

Until the day we expand scientific objectivity to infinity, we will have to broaden our own objectivity.

← Reformers of the Joseon Era
An Absence of Belonging →