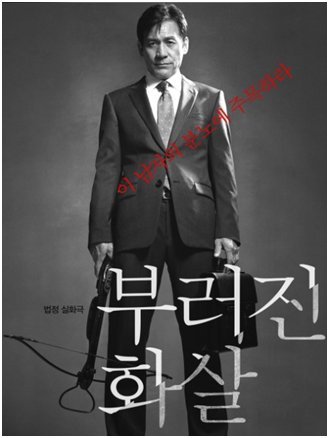 The above sentence from the poster for “Broken Arrow”, released on January 18, 2012, gets the public’s attention. This film is an adaptation of a true story based on the crossbow terror case of 2007. Since “The Crucible” (aka “Silenced”), which dealt with the topic of child sexual abuse, did well at the box office last year, Broken Arrow has been the talk of the town as a similar film about an important social problem.

It deals with the abuse of power by the judiciary against an oppressed, weaker person. Professor Kim, the main character, is wrongly terminated from his professorship and files a lawsuit against his college. The dishonest judge, however, rules against him and dismisses the possibility of an appeal. Professor Kim is so indignant that he goes to the judge’s house with a crossbow to ask him for a fair trial. They tussle over the crossbow and an arrow is fired from Kim’s weapon. Kim states that he accidentally shoots the arrow, which hits a wall and breaks. The judge claims that he is struck by Kim’s arrow, which has been shot intentionally.

The judiciary discusses the facts of Kim’s alleged crime before the trial. They accept many pieces of contradictory evidence and override Kim’s defense. Even though the broken arrow is the most important piece of evidence that could prove Kim’s innocence, the police lose the arrow and the judges make their decision without additional investigation. Kim is sentenced to four years’ imprisonment.

Audiences easily understand the point of the film without special knowledge of the law. The pace of is calm overall, but audiences get engrossed in the film because of some dramatic scenes. Viewers can get angry about the corruption of the judiciary because they know Kim symbolizes themselves, their family, and the majority of a nation. They may be the next victim of the judiciary’s corruption. Therefore, they want to show that they will not take such injustice lying down.