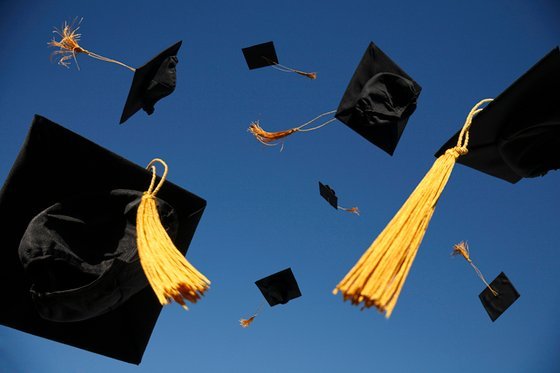 The 61st Summer Commencement Ceremony was held on August 20 at 11 am in Woowon Hall where a total of 406 graduates received their degrees this year. Kim Dong-un, the Dean of the Office of Academic Affairs began the ceremony with a commencement speech. After the Pledge of Allegiance and playing of the national anthem, Pastor Park Hyung-soon offered a prayer for all of the soon to be graduates by saying, “I hope that all of you will make Kangnam University proud by being upstanding members of the community.”

Among the 406 graduates this year, 53 received their bachelor’s degree, 3 received their doctoral degree, and 350 received their master’s degree. Thus, a total of 33,761 have graduated from our university. President Yoon Shin-il conferred the diplomas to the graduates in person followed by a conferment of awards to outstanding students. Han Dong-geun (Urban Planning), one of the graduates that received an award commented, “I am thrilled and happy to have received this award.” Kang Young-joo (English Literature), also expressed her joy be saying, “I can’t believe I’m finally graduating. I’ve been waiting for this moment.”

President Yoon Shin-il stated, “I would like to extend my deepest respect for all of your hard work for the past 4 years.” He offered his congratulations by imparting some advice for the graduates by stressing the importance of having passion and being proud of themselves making them one step closer to their dreams. Baek Bong-hyeon, the president of the Alumni Association, was unable to attend the graduation ceremony. However, Ahn Young-hee, the senior director of the Alumni Association, gave a speech on his behalf. “I wish you all continued success.” Congratulations to each and every one of our 406 graduates, and I wish you all the best in your future endeavors.” The Kangnam University school song was sung by all of the graduates. Pastor Park Hyung-soon ended the ceremony by saying, “God bless each and every one of the 406 graduates as well as all those in attendance today. I wish you all nothing but the best.”

Summer commencement ceremonies are relatively small compared to the winter ceremonies. Regardless of when they are held, graduation ceremonies are one of the most important events on campus. Hopefully there will be a bigger turnout in the future as these ceremonies mark a new beginning for the graduates.

← Obituary: A tragic loss
EDITORIAL: Pa Bu Chim Joo (Never give up and fight until the end) →