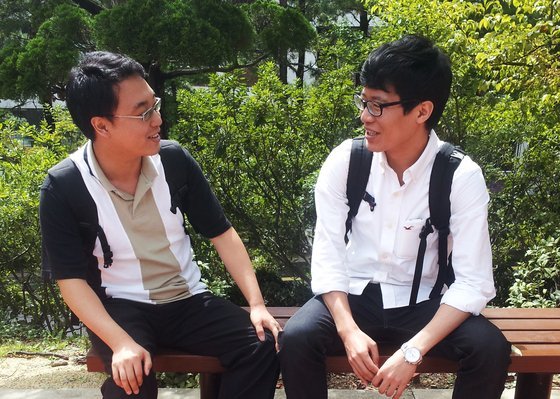 Over the summer two Kangnam University students received outstanding scores on their TOEIC exams. 32-year-old Park Seong, a junior in the English Literature department, received a perfect score of 990. Born in Jochiwon in South Chungcheong Province, Park went to elementary school in the United States from first grade to his second year of middle school. Living in New Jersey for four years and New York for three, Park has studied English steadily. In high school, he studied for the TOEIC and TOEFL exams by himself. He says his early scores were disappointingly low.

24-year-old Song Chai-young is also a junior majoring in English Literature. He received a score of 945 on his TOEIC test. Born in Ulsan, Song has never been to a foreign country, but he has studied English since he was 10 years old. He began to take his English studies more seriously after he left the army. He often thought about going to America, but has decided against it. He thinks he can learn enough English in Korea.

Students often complain that university English courses are not much help in preparing them for exams such as the TOEIC. Park and Song, however, say their English Literature courses have helped them considerably. They say “The Study of TOEIC” and the club “Power English” under Professor Mun Jae-ik were especially helpful. Thanks to those courses, they were able to improve their English skills. They have studied alone like many other students, but have taken university courses to help them prepare for their civil service exams.

Both intensified their studies a month before the actual test in order to get accustomed to it. In addition to studying English untiringly, they took many practice TOEIC exams. They said those were the secret to their high marks. According to Song, “Time is the remedy.”

Park and Song also admit to having had some luck, though it was clearly the result of preparation. Before the test, they looked hard at areas in which they were weak. Song said he filled five notebooks with drills and exercises.

Both said they felt relieved after completing their exams. Park, who was convinced he couldn’t get a perfect score, has no more reason to doubt. Song hasn’t yet mastered his speaking and writing, so he plans to work on those areas.

For those students who would like to follow in their footsteps, Park and Song offer four tips. First, use a mechanical pencil with thick lead. Second, take the test that people take during vacation as the TOEIC has an element of relative evaluation. Third, speed, pace and sense are important. Don’t read everything in the reading sections. Listen and check the answers immediately in the listening sections. A famous TOEIC instructor said, “Are you a cow? What are you chewing over?” This means as soon as you listen, check the answers and don’t brood over the content. Fourth, don’t take more than two practice exams in one day because it is not efficient.

Regardless of tips and tricks, all students can learn from Park and Song’s accomplishment that if one works hard, there will be a reward. If they did it, maybe there is hope for the rest of us.

← Where the magic happens
Celebrating a culture we love with KISS →