Prime Minister Baburam Bhattarai (left) is the effective leader of the Unified Communist Party of Nepal (Maoist). Ram Chandra Paudel (right) is Vice President of the Nepali Congress Party. Both men ran against each other last year for the office of prime minister. This year their parties are among several trying to gain a majority of seats in the Constituent Assembly.
(SOURCE: aakarpost.com)

A Constituent Assembly election will be held in Nepal on 22 November 2012, following the dissolution of the Constituent Assembly on 27 May. After King Gyanendra dissolved Parliament in 2005 and took control of the government in order to end the country’s civil war, mass protests led to his re-instatement of Parliament the next year. This brought an end to the war fought by the government against the Communist Party of Nepal (Maoist) on the condition that the country’s constitution would be rewritten. In 2008, the monarchy was abolished and an interim constituent assembly was elected for a two-year term to write a new constitution. Their efforts failed despite four deadline extensions — the most recent one in May. As a result, there were several violent protests, rallies, and bandhas (strikes in Nepali) by several political parties and a variety of ethnic groups. Prime Minister Baburam Bhattarai called for a new election on 22 November. The question remains whether, after years of deadlock in which the political parties had failed to agree on a new constitution, the election would produce the desired results.

Why did efforts to write a new constitution fail in the first place? The CPN (Maoist) demanded 10 to 14 new provinces, based largely along ethnic lines, arguing that “a constitution is not possible without federal states recognizing the identity of ethnic groups.” A member of the Nepali Congress Party accused the CPN (Maoist) of wanting to merely disrupt the proceedings in order to stay in power. Talks broke down between the parties after that. As a deal could not be made, going to the polls was the only solution. 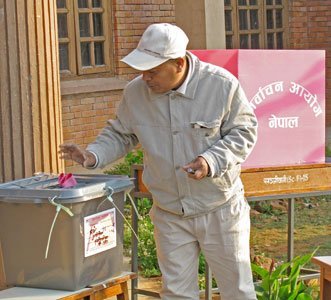 A Nepalese man casts a vote for the Constituent Assembly election in 2008
(SOURCE: test.ifes.org)

The Election Commission of Nepal will manage the electronic poll machines at 10,000 centers and 22,000 polling stations throughout the country for more accuracy and efficiency. All of the political parties, civil groups, journalists, and general public will keep their fingers crossed for the completion of the constitutional election without any disruptions. This election has been a demand for patriotic political leadership, legitimacy, economic growth, and stability of democratic constitutional order. The people of Nepal still doubt the election will go through as planned. Many are not confident that, even with a new election and a new body in office, the parties will institutionalize a federal republic of Nepal and promulgate a new constitution.