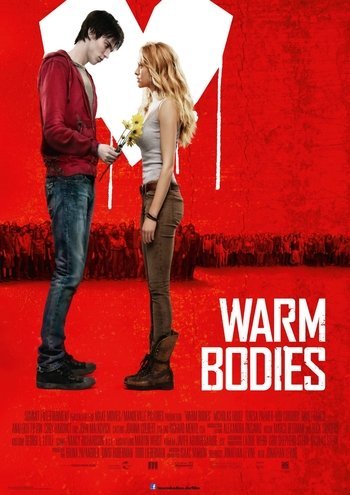 Jonathan Levine’s film Warm Bodies opened earlier this year to positive reviews and big numbers at the box office, earning more than $20 million opening weekend. The success of Warm Bodies is not a surprise considering the interesting story and the presence of British actor Nicholas Hoult in the leading role. Girls have been enamored of the popular actor and his good looks since his work on the British drama Skins.

In Warm Bodies, the world has been taken over by zombies. Julie is one of the human survivors. One day, she and others from her group leave their compound to find food and are attacked by zombies. One of the zombies, played by Hoult, kills Julie’s boyfriend and eats his brain. This allows the zombie, who is simply called “R”, to read the victim’s memories and feel his emotions. R falls in love with Julie and brings her back to his hideout.

Julie is afraid of R at first, but he makes an effort to comfort her. Over time, she learns to trust him. R later confesses that he was the one who killed her boyfriend. This causes Julie to leave R and return to her group.

Meanwhile, R does something zombies should not be able to do: he dreams of Julie in his sleep. In fact, he finds that he and other zombies are becoming human again.

He finds Julie’s home and tells her the news. Julie is happy to see him. Her friend Nora is skeptical, but agrees to help. The biggest problem is Julie’s father, who is Colonel Grigio and the leader of the human survivors. He doesn’t believe zombies can return to normal and tries to kill R.

Nora helps R and Julie escape from Col. Grigio, but they soon come upon a battle between R’s friends and an army of bonies, zombies that look like skeletons and try to kill anything. R helps Julie escape from the battle. They run into Col. Grigio, who shoots R and wounds him. Everyone is shocked to see R bleeds like a normal person. Finally realizing the truth, Col. Grigio helps R’s friends defeat the bonies. The end of the movie shows humans and zombies living together in harmony.

Audiences probably had never associated zombies with romance and assumed they could only be scary and cruel. Warm Bodies is a fresh take on the zombie genre you are sure to love.