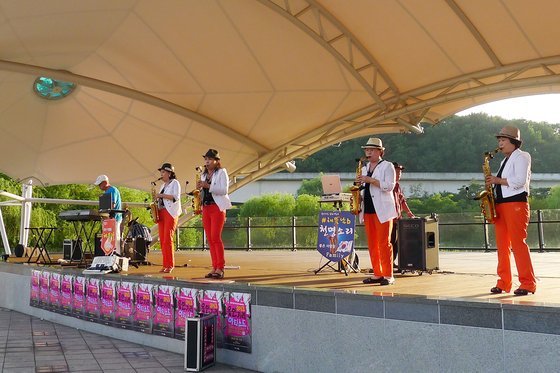 It is the middle of summer, and the sounds of the senior citizen band Day of Sunrise (해뜰날) echo throughout Dongbaek Lake Park. Kim Hak-sung, the white-haired leader of the band, plays the keyboards while the other members play the saxophones. Day of Sunrise plays Korean folk songs (민요), but the Korean traditional melodies are reinvented through the sounds of Kim’s electronic keyboard and his band of powerful saxophones.

Day of Sunrise perform mostly on the street. Kim Hak-sung, who has played for twenty years said, “Yesterday we were at Yongin Market; today we’re at Dongbaek Lake Park. Next week we’ll be in Giheung Station. These street performances give us many opportunities.”

The band is a part of Yongin Street Artists 2013, which is the Yongin Cultural Foundation’s project for 2013. Until November we can enjoy street performances of acoustic rock, jazz, hip-hop, and even samulnori (사물노리) by forty different groups all over Yongin, including Kangnam University!

Yongin Street Artists 2013 provides great opportunities not only for musicians, but audiences as well. “I think this is one of the great things about living in Yongin,” said local resident Lee Beop-ju. “I can enjoy quality live music right in front of my house.”

To find out more about Yongin Street Artists 2013, visit their website. The shows run until November, so keep an eye on their performance schedule. There may soon be show near you!