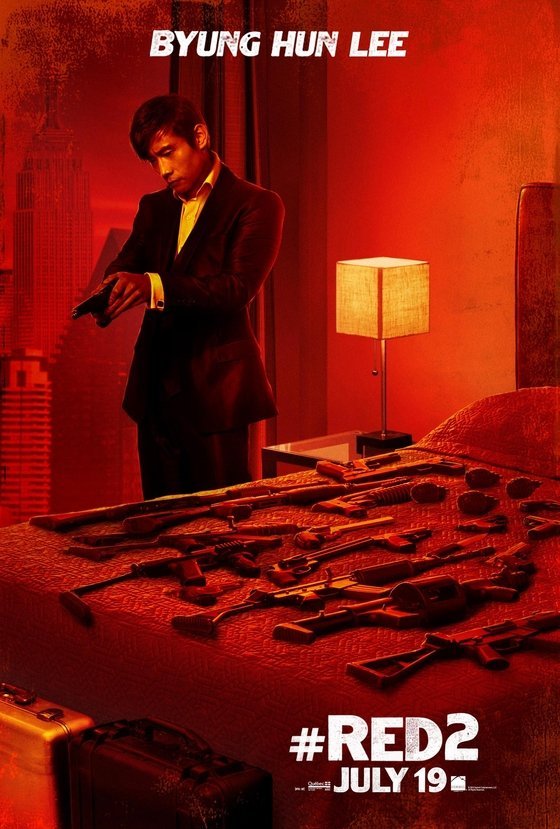 RED 2 is the sequel to the 2010’s RED (meaning Retired, Extremely Dangerous). Bruce Willis and John Malkovich return as Frank Moses and Marvin Boggs. RED 2 has gotten a lot more attention in Korea than the first one, probably due to the casting of popular actor Lee Byung-hun, who plays the killer Han Cho-bai.  A mere four days after its release, RED 2 beat other popular movies in Korea at the box office.

In RED 2, CIA agents Frank and Marvin have to secure a nuclear weapon called Nightshade. Other countries’ agencies want to get their hands on this weapon for evil purposes. Even Dr. Bailey (played by Anthony Hopkins), the creator of the bomb, wants to detonate the weapon. Getting the weapon is not easy, however, and there is a lot of sabotage along the way.

Everyone in the movie does a great job, but Lee Byung-hun really stands out. In recent years, Lee has gained a reputation for his strong action performances. In RED 2 he plays Han as a cruel and bloody killer. Early in the movie, Han is focused on trying to kill his enemy Frank. But we see that Han is not so bad when Frank convinces him that they must work together to stop Nightshade from exploding. They call a truce in a scene of reconciliation that made the theater audience laugh. Despite this spirit of cooperation, Baily sets off the timer for the bomb and escapes by plane. Han reacts by shouting swear words in Korean, which is really funny and made the audience roar with laughter and applause. Everyone learns, however, that Frank has snuck the time bomb onto Bailey’s plane, killing him. So the movie has a happy ending.

RED 2 is a fun movie full of marvelous action and comedy. If you haven’t already seen it, you will love it.