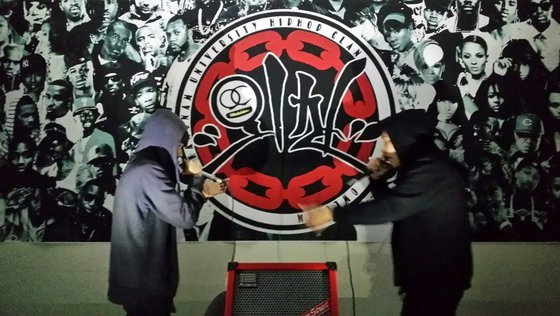 There are a variety of music clubs at Kangnam University. One of the coolest may be hip-hop club Ow2-Chim (외침 pronounced Wey-chim). The name Ow2-Chim roughly means “Let’s shout out!” People are sometimes intimidated by hip-hop and have preconceptions that it is violent music. The members of Ow2-Chim, however, insist the music is actually pleasant, while the club is a productive way to help students realize their dreams.

Member Hong Beong-wook says that Ow2-Chim was originally a poetry and literature club. The shortage in the number of student members led to a crisis for the group. In 2007, the club decided to change their image entirely. With the hard work of the senior members, Ow2-Chim was able to develop into a popular club with strong membership, recruiting sixty members over the past five years.

The chance to practice is one of the beautiful things about the club. Between classes or at the end of the day members get together in the basement of Cheon-eun Hall, working in groups of two or three, making their own beats and writing their own lyrics. “Writing your own lyrics is important,” says member Yang Hyeong-seok, “because everyone has their own idea and interpretation of music.”

Members of Ow2-Chim during a practice session.

Every member joins as a beginner, but learns to perform like a professional. One of the clubs newer members Kim Joo-ho is astonished by how well the older members are able to sing and rap. “It’s so good to hang out with people who love listening to and making music,” he says.

Ow2-Chim also take their hobby to the public, performing about ten times a year. They perform regularly at Kangnam University’s spring and fall festivals, local shows, and their own subscription concerts. They also liven things up by supporting other KNU student club events. By performing live, members hope to get better.

Ow2-Chim will perform at Geek Club in Sinchon at the end of November.

← Artistry gets a warm reception
Be one with Kusama →