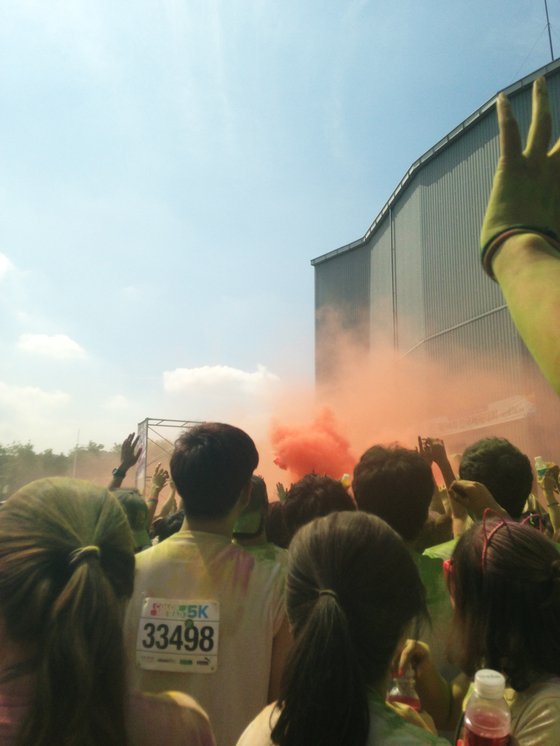 An explosion of color has hit Korea! Color Me Rad, the 5 kilometer marathon with a color bomb, was held in Incheon’s Munhak Stadium on September 7. From Koreans to Americans, kids to adults, there was a large turnout of people gathered to run, roll, and play.

This unusual race has its origins in the Hindu religious festival Holi, which celebrates the beginning of spring. Color Me Rad combines the element of color with a traditional 5k run. Each participant is offered a color bomb containing a colored powder made from corn flour. During the 5k run, people threw their bombs and rolled themselves onto their colorful contents. In contrast with other marathons, therefore, you don’t have to run fast to get a medal.

Before the marathon began, we runners prepared as one might prepare to go swimming. Everyone was required to change into a uniform and wear sunglasses to protect them from sunlight and the color bombs. Then we were led in a warm-up dance by the marathon’s host. Next we applied colored powder to our bodies. Then everyone was ready to color themselves rad! 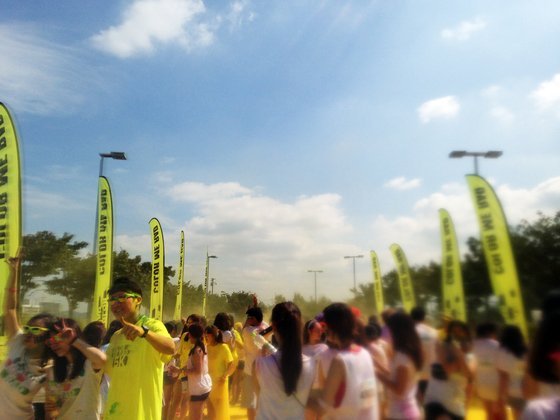 Even though 5 kilometers is not a long distance as far as marathons are concerned (a traditional marathon is about 42 km), there were many exciting checkpoints. Staff threw boxes of colored powder at the color bomb section. They also sprinkled water on runners when they got hot. Most enjoyable of all, participants got to meet lots of new people along the way, throwing their own color bombs or taking pictures together. People from all over the world participated, making it a great opportunity for new and interesting friends.

By holding Color Me Rad in the beginning of fall, runners were able to enjoy a cool breeze and the scent of a new season. Walking under the clear skies, I felt like I had returned to my childhood — not having to think about keeping my clothes clean or paying attention to the time — just walking, talking, laughing, and maybe throwing a color bomb at a new friend.

← EDITORIAL: Preparing for the age of convergence
Martín focuses on the basics →