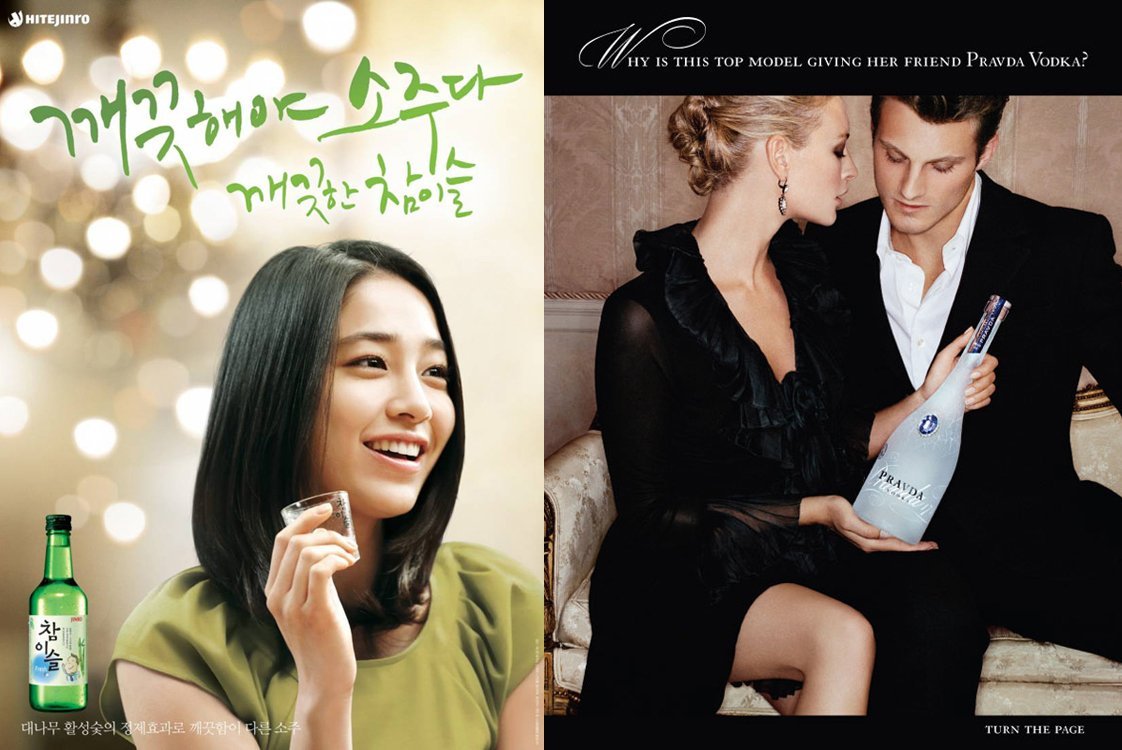 Everywhere we look we are surrounded by advertisements, whether they are television commercials, billboards or print ads. For an effective ad, the use of color, text, and photography are all key factors in ensuring a successful campaign.

Twenty Kangnam University students (ten Korean and ten international, with an equal number of males and females per group) were asked to evaluate two ads: an ad for soju from Korea and an ad for vodka from Kazakstan. In the end, students were asked which ad they found more effective.

Of the Korean females, two of them preferred the ad for soju. They were impressed with the bright colors and the dreamy background. “I’ve seen this ad many times, so it’s familiar to me,” said Hye Joo, a 3rd-year computer engineering major. “Everything looks just right, and the model looks good, too.”

Three of the Korean males were also moved by the model in the soju ad. “I know that in marketing, people are generally attracted to a baby, a beauty or a beast,” said Jang Jun, a 4th-year general education major. “Both ads have a beautiful woman. But the soju ad is more familiar to me, so I like it more.”

A beautiful model was not enough, however, for all five of the female international students, who preferred the ad for vodka and were generally unimpressed with the composition of the ad for soju. “It’s not attractive at all,” explained Akhmedyanova Sabina, a 3rd-year business administration major. “I think there’s something wrong with the location of bottle. And there’s too much writing.”

Three of the five Korean females preferred the ad for vodka but were attracted to its portrayal of high-class living, expensive tastes, and exclusivity. “I like the background in the ad, the contrast of black and white, and the smell of money,” explained 2nd-year real estate major Eun Jeong Kim.

The male international students also preferred the vodka ad three to two. David Zurita, a 1st-year international trade major appreciated the sophisticated image the vodka ad portrayed. “You can see their lifestyle is not mundane or ordinary. Moreover, this is not a party of drunken teenagers. Instead, these are sophisticated people enjoying a drink within reasonable limits.”